Ending Genghis: a Story About Kids and a Very Bad Dog

I’m writing a few stories and thought I’d serialize one on this blog, as stories used to be in newspapers. I’ll have more additions over time, but writing it here might prod me to write more often for you, the reader! 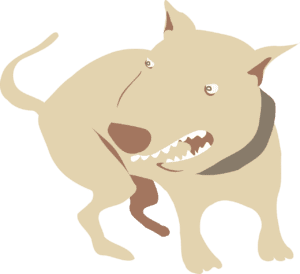 He was the worst dog in the history of dogs.  And all the kids on Grapevine Road knew it.  He moved in to the house where the McAlister’s used to live.  He had owners, of course, but every child knew that the dog was in charge.  The humans were largely irrelevant, except as bipedal enablers of the mixed-bread hell-hound known as Genghis.  It was his real name.  Genghis.

‘Don’t they know who Genghis was?’  Bobby Adkins asked.

‘I don’t know who Genghis was,’ his best friend Dan replied.

‘Look, Genghis was this Chinese guy who took over the whole world.  A long time ago.  And he was mean as a two-headed rattlesnake!’  Bobby was standing, waving his arms.

‘I saw a two headed garter snake once,’ Candace said.

Bobby shook his head at the hastily assembled senate of children.  He fixed his deep blue eyes on each child in turn.  And like Lincoln, or perhaps even Cicero, he held forth with a fixed purpose and with rhetoric beyond his 11 years.

‘Children, friends, kids who have lived her your whole lives!  (At this the others scanned the fields and gardens, expecting others to rise up from the dirt and grass, en masse and ghostly.)  Kids, I tell you, something has got to be done!  That dog has done terrible things!  Why, he killed little Tammy’s baby kitty; we all know he did.  And he knocked over the widow Barbour in the dark when she was watering her garden.  (She said it was a bear but we all know the truth.)  And every time we ride our bikes past his house when nobody is home, he jumps the fence and chases us till one of us wrecks, then he growls until he gets bored and goes home.  He’s a pure-T terror.’

‘What should we do, do you reckon?’  Little Mark Roberts was always ready to follow, but he needed a plan.  ‘What do you think?’

‘I think,’ he paused, looking gravely at the ground, ‘I think we have to kill him.’

A collective gasp went up from the children; it was one thing to kill a water-snake or a crawdad.  Maybe even a blackbird in the garden.  The Allens up the road trapped Muskrat for fur, but they were wild creatures.  (The Muskrats and the Allens.)

But a dog? And it was even worse than that. Genghis belonged to Bobby’s grandma and grandpa, who had just moved in from Akron.  Bobby did not show his full hand.  He hated the dog for its anger and its danger.  But he hated it more because his grandparents paid it more attention than they did him.  But then, he thought to himself, ‘what murder didn’t have more than one motive?’  He had learned about motive in English class last year.  It made sense.

It was going to be an interesting summer to say the least.  Mark summed it up in his best third-grade voice.  ‘That’s a hell of a thing buddy.  But I’m in.’

Each one left the hallowed circle of friendship and went home.  Their instructions were as follows:  ‘see if you have any kind of weapon or poison at home that you won’t get whipped for sneaking out.’  Everyone knew that their daddy’s deer rifles and surplus Army rifles were strickly off limits.  Machete’s were far-off dreams from exotic catalogs.  So they went home and poked around, answering parents’ query ‘what are you doing?’ with the customary childhood retort, ‘oh nothing.’

And over a few days, they collected two Crossman pellet guns (the kind you can pump ten times!), a box of moth-balls, a pint of ‘Weed-be-gone,’ some rubbing alcohol, fifteen bottle rockets, a hand sickle, an aluminum ball-bat, a partly rusted but menacing muskrat trap and a sling shot missing one rubber band.

And on June 20th, they snuck away to their hide-out on the hillside, the the assembled tools of their dark trade slung over Mark Robert’s shoulder in the duffle-bag his older brother brought home from the Air Force.

It was warm, but not too hot.  The trail snaked along for almost a mile through hard-wood forests thick with summer leaves.  It crossed a wide pasture of broom-straw that was not yet dry enough to rustle, and only seemed to simmer as bees and assorted flies buzzed over it.  Spread out like commandos on a raid, they looked all around in case someone might be following them.  They spoke in whispers in a forest empty all around.

The trail wound up a hill and down, then around a small knoll to where the native rock made a kind of shelter of three sides, its stones embedded with fossils of sea-shells.  It was a magical place for the children, where they went to hide.

The passing of cars echoed up and over the hillsides.  And as they sat down in their fortress of solitude, another sound rose up over the rest, clear, carried on the warm breeze.  The bark, fierce as always, of Genghis.  He was barking frantically, and the hair on their young necks stood up.

What’s got him barking? asked Dan, scanning the woods as if there were still mountain lions afoot.

‘Oh, Grandma and Grandpa were away, and when they come home he goes crazy.  Mama’s been feeding him.  She’s afraid for me to go over.’

Candace, ever reasonable as women (even young ones) typically are, asked ‘have you told your mama about the dog?  If she won’t let you feed him she must be scared too!’

‘Sure, I told her.  But she says that Genghis ain’t a problem and the rumors ain’t true, because all he does is lie in the back yard all day. She says he’s too fat and old to jump the fence and it must be another dog.  And she says the folks love the dog oh so much and he’s like their baby.  Some baby.’

Little Mark, whose lexicon of profanity was growing, jumped in.  ‘Why that’s the gal-damnedest thing!  I seen him jump that fence the other day when I was walking home.  I was headed towards him but he was after some opossum.’

Dan remarked, darkly, ‘I saw that possum. It wasn’t playing dead.  It was really dead.’

They all looked down in brief mourning for the deceased marsupial.  Despite the fact that all of them had been terrified by hissing possums in the night and considered them demons.  After an appropriate pause, Bobby brought them back around to business.

‘I figure we need a code for our team.  That’s what spies do.  And we’re kind of spies.  Or assassins.’

‘No you moron, assassins, killers for hire.  Cept we’re hiring ourselves.’  Bobby wanted a serious group, dedicated to the work at hand.

Candace liked fireworks and suggested that in the chaos of July 4th, a crime could be covered up more readily.  Dan recommended Labor day, given that so many adults would be drunk they might not know anything that happened.  Perhaps they could even pin the heinous act on a grown-up.  ‘Like put him behind someone’s tire before they pull out or something.  After he’s dead, of course.’

But it was Mark Roberts who had the best idea of all, and everyone agreed.  While they felt a certain urgency to rid the neighborhood of it’s K-9 scourge, it would be best of all if they did it on Trick or Treat.  The moon might be bright, everyone would be in costumes and kids from all over the area would be walking up and down the street. Furthermore, there was something exhilarating about planning a murder, even the murder of an aged couples’ beloved pet, on the night of ghosts, goblins and haints.  It was agreed.  The planning would begin and the act would occur on October 31st.

Nobody else got it.

How could an ER miss Ebola? Let me explain…

Dear aspiring writers…if I can do it, so can you

The infant is packed away